A day in the life of our executive chef

As he says this, Martyn Nail waves his arm towards the gleaming spaces that constitute the culinary engine room of the majestic art deco liner that is Claridge’s.

There is something about Martyn that reminds you of a world-beating sports captain, a calm control and attention to detail and preparation, all executed in true Claridge’s style. For Martyn, Claridge’s is a happy family home, and it’s his job to nourish that family.

“Osmosis-like absorption of skills from his grandmother”

A recent addition to our culinary vernacular is ‘food memories’ and Martyn’s are particularly rich.

He recollects sitting on the kitchen sink draining board, stirring lemon curd, or looking at the amber-like beads of sweat from a ripe plum, ready to burst from the tree in the family garden, and land in a pot of sweet jam.

These memories are strongly linked to his grandmother, who was a housekeeper at Highclere Castle, home of the phenomenally successful television series Downton Abbey.

And perhaps this is where his journey to Claridge’s kitchen began: in the osmosis-like absorption of skills, appreciation and tastes from his mother and grandmother.

Martyn’s first real interest was actually in horses. He learnt to ride at age six and continued well into his teens. His first dream job was to be a veterinarian, but the realisation that hard academic work and seven years of university lay ahead made that less attractive.

And so to scraping the Jersey Royals in the 30° heat of Claridge’s kitchen, Martyn’s first job after studying catering at Highbury College in Portsmouth.

From potatoes to the soup section, learning egg dishes, pastas and the difficult and delicate Petite Marmite, consisting of a variety of meats, bones and vegetables simmered in stock to create a luxurious broth.

He also met the legendary Stan, whose speciality was pommes soufflées, or puffed potatoes. These were sliced potatoes cooked twice in hot oil, resulting in beautifully blistered crisps, traditionally served with game dishes.

This grounding has influenced how Martyn cooks today. But now the focus is on layers of flavours as opposed to layers of elaborate detail.

“Look for the trinity of quality, service and price”

Martyn believes that carefully sourced ingredients, treated with respect, create great dishes. Roast chicken and mash can be a great dish, but only if it starts in the right place – organic chicken, dressed and seasoned correctly, simply roasted, and served with rich, buttery, velvety mashed potato. A joy.

There are other classics Martyn loves to serve: fish (British, from cold and deep water) and chips, as well as scampi Provençal (easy on the garlic). When pushed for the dish he feels best represents Claridge’s, he goes for Truffle Lobster Risotto – the truffle from France, the Lobster from Cornwall, the rice from Italy – a truly British take on international authentic ingredients, with a sprinkle of glamour.

Martyn’s final comments could be a mantra for a life well-lived – look for the trinity of quality, service and price, and you can’t go far wrong. Every supplier to Martyn’s kitchen door knows this code by heart. That’s why they have his business.

Follow a day in the life of Martin Ballard MBE, who has been at Claridge's for 30 years. 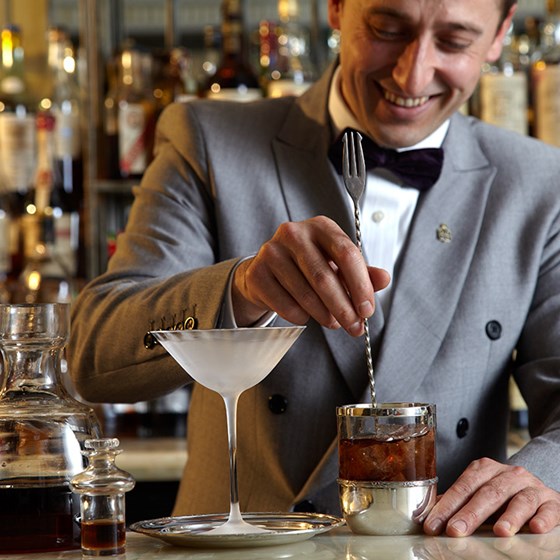 Two legendary bars with unique characters - and chief among them is Denis Broci.

For doorman Roman Proboziack, there is no such thing as a typical day.